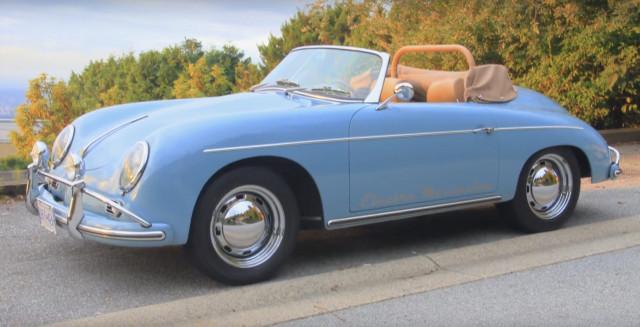 Building a new car, especially one with four wheels intended to be sold in developed markets, is show-stoppingly expensive.
A simpler approach is to build a kit car. Kit cars don't come with engines, so to make an electric kit car requires only selecting an electric motor instead of an engine.

That seems to be the approach Electra Meccanica is taking with its latest—admittedly beautiful—creation.

The company has been promising to built an all-new two-seat roadster called the Tofino to follow up its Solo three-wheeler.

As the company struggles to develop the Tofino, it has teased another, simpler roadster in a new video that it says is "Coming Soon."

Electra Meccanica didn't release any details or timing regarding the new roadster, but the video reveals a few details.

The e-Roadster is a simple, but gorgeous kit car, the Intermeccanica Speedster, converted to electric power.

The Intermeccanica Speedster is a fiberglass kit car based on the design of a 1955-1959 Porsche 356 Speedster.

Since early Porsches were based roughly on early Volkswagen Beetle mechanical components, the fiberglass Intermeccanica Speedster uses the floorpan and usually the engine and transmission from a Volkswagen Beetle.

Since the Intermeccanica Speedster doesn't come with its own engine or transmission, and electric motors don't need emissions certification, it's easy for Electra Meccanica to swap an electric motor into the Speedster to make the eRoadster.