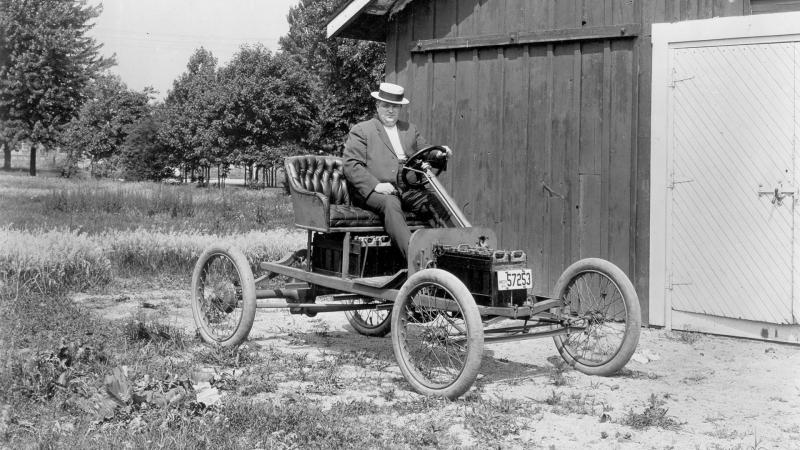 PRESENT
The unexpected success of the Toyota Prius in the 2000s ushered in what might be described as the hybrid decade. That period was defined by automakers once again questioning if batteries were affordable and robust enough for pure electric cars. Ford shifted its efforts to hybrids, an approach that continues with its current lineup.
In the wake of the 2008 financial crisis, Ford was well positioned to push for EVs – a technology favored by the new Obama Administration. The company unveiled its Focus Electric at the 2009 Frankfurt Motor Show. Using the Focus platform was a logical choice. Auto critics consistently pointed to the Focus as one of the most attractive small cars on the road. The EV variant, which went into production by 2011, used a 23 kilowatt-hour battery pack officially rated to provide 76 miles of range.
When it was introduced, the Focus Electric was the only pure EV that looked and drove like a so-called normal car. That was a welcome relief from geeky EV designs like the first-generation Nissan LEAF and Mitsubishi i-MiEV. Also, the Focus was fun to drive. The 134-horsepower motor provided decent zip. The liquid-cooled battery management system ensured consistent year-round range and battery life.
The big drawback with the Ford Focus Electric was lack of cargo space. As a gas car converted to run on electricity, the main battery pack was packaged under the liftgate reducing hatch cargo space by 39 percent, to just 14.5 cubic feet.
The Focus Electric’s initial starting price was $39,995 before incentives. To keep sales flowing, Ford in 2013 Ford dropped the price by $4,000 and offered a $6,000 dealership incentive, reducing the net price to $29,200. By the following year, that became the Focus Electric’s standard price.
Months before the Focus Electric went on sale, Ford’s chief executive Alan Mulally was downplaying the viability of EVs. “The infrastructure is just not there yet,” Mulally told Newsweek, from the sidelines of the 2012 Detroit Auto Show. “These are very expensive vehicles because the batteries and electronics are very expensive.”
Even as Ford increased the size of the battery in 2017 to 33.5 kilowatt-hours – expanding its range to 115 miles – the Focus Electric was an also-ran. All told, Ford sold about 9,300 units before the company killed the Focus Electric (and most of its cars) in April 2018.
Experiments and Plug-in Hybrids
There were other short-lived Ford EVs. In 2010, Ford retrofitted a few hundred Transit Connect delivery vehicles to run purely on electricity. The company ran a pilot program to create a plug-in hybrid version of the Escape Plug-in Hybrid. And in 2011, it unveiled the Ford Evos, a plug-in hybrid GT concept with gull-wing doors.
The company’s most successful productionn plug-ins were the Ford C-Max Energi and Ford Fusion Energi (the current sole surviving model).
When the C-Max arrived in 2012, it looked like a winner. Only available as a hybrid and plug-in hybrid, the small and tall wagon-like compact provided 20 miles of all-electric range and a 188-hp power plant. The time seemed right for Americans to embrace the type of small utility car that Europeans have long embraced. But the experiment never quite worked. Consumers were confused about the in-between nature of the C-Max’s dimensions and the hard-to-describe powertrain. Besides, the Volt offered a lot more all-electric range.
In 2013, complaints and lawsuits emerged about the C-Max Hybrid not achieving its advertised 47-mpg EPA rating. Ford downgraded its fuel-economy rating of the hybrid to 40 on the highway – lowering it a second time in 2014.
The C-Max had a couple of years of decent sales. But the numbers were always well behind the Chevy Volt and Toyota Prius Plug-in Hybrid. By November 2017, Ford pulled the plug on the C-Max.
Consumers were more open to the Fusion Energi plug-in hybrid as a mid-size sedan with a traditional trunk. It ranked as the sixth most popular plug-in hybrid in 2018 – behind the Prius Prime, Honda Clarity PHEV, Chevy Volt, and BMW 530e. With Ford eliminating its cars (in favor of SUVs and trucks), the Fusion is now a moribund model.

FUTURE
To get its EV program back on track, Ford announced in Dec. 2015 that it would invest $4.5 billion in “electrified” solutions (including hybrids, plug-in hybrids, pure EVs, self-driving cars, and all kinds of mobility services). The company promised that 40 percent of its nameplates would have electrified options by 2020.
By 2016, news emerged that Ford would create an affordable 200-mile EV, possible called the Model E, to compete with the Tesla Model 3. Sources said it would go into production in spring 2019.
But the biggest announcement about Ford’s future EV plans came in Dec. 2017. The company said it would create a new division dubbed Team Edison to design and produce electric and autonomous vehicles in a 45,000-square-foot former Ford factory in downtown Detroit.
On Sept. 7, 2018, Ford issued a teaser image for the first vehicle to be produced in the company’s new EV era. It showed the profile of Mustang-inspired 300-mile electric SUV, which is expected in 2020.
“We are being tasked to set the future trajectory of the company,” wrote Darren Palmer, Ford’s product development director for electric vehicles.
Palmer said that he and his team were “energized” by the company making an $11 billion investment to produce 16 fully electric vehicles by 2022. The Chinese market will figure prominently. The list of plug-in models includes versions of the Ford Escape crossover SUV, Lincoln MKC, and Transit Connect.
Ford continues to trickle out news about future electric vehicles. Last week, Jim Farley, Ford’s president of global markets, confirmed plans for an all-electric version of the F-Series pickup – the best-selling vehicle in the US for more than four decades. No date was given for when a new Ford electric pickup would be introduced.
Back to news list