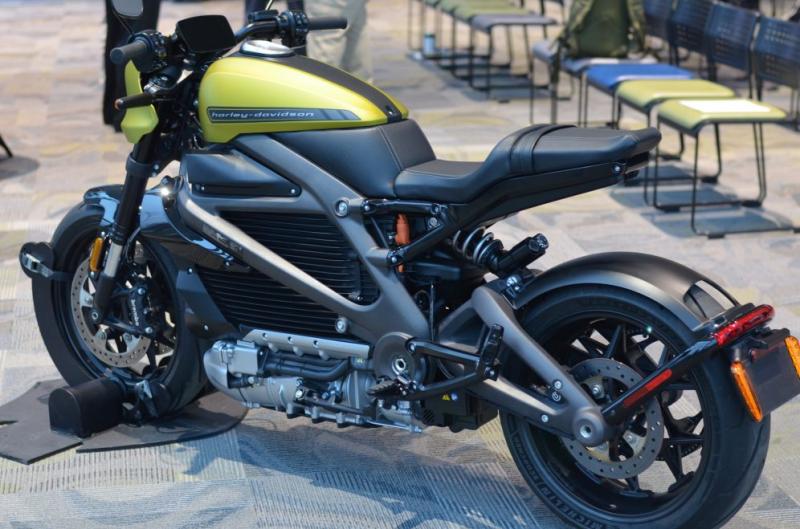 Micah Toll Jan. 7th 2019 1:45 pm ET
Harley-Davidson has been teasing its electric motorcycle LiveWire for over four years, and just recently announced plans for an expanded portfolio of electric motorbikes. Today they delivered on the first step of their promises in a big way.

The company is showing off not only the previously unveiled LiveWire electric motorcycle, but also two new electric two-wheelers at CES 2019 in Las Vegas. On top of the dramatic unveiling, Harley-Davidson has unveiled more specs regarding the LiveWire including the retail price and opened up pre-orders, with deliveries planned for this fall.
Harley-Davidson LiveWire specs revealed and pre-orders open
Harley-Davidson promised us an electric motorcycle in 2019 and it looks like they are ready to stand by their word.

The LiveWire electric motorcycle is now available for pre-order at H-D.com/LiveWire.

Prepare yourself, the retail price of the newest American-made electric motorcycle has been set at $29,799.

Details about the mechanical tech specs of the LiveWire have been slowly dripping out for months. These include high quality Brembo brakes, fully adjustable Showa suspension, Michelin sport tires, cornering-enhanced anti-lock brakes, traction control, etc. It’s a premium bike for a premium customer. Meanwhile, Harley-Davidson has been much more tight-lipped about the electrical specs.
Today though they lifted the curtain just a bit to reveal the LiveWire’s estimated all-electric range: approximately 110 miles (177 km) of mixed city/highway riding. I did my best to work the kWh size of the battery out of Paul James, the Director of Motorcycle Planning at Harley-Davidson and one of only a select few to have any substantial saddle time on the bike, but he was admirably cagey. Paul indicated that the battery capacity and exact motor power might still undergo small changes before production, so the final numbers haven’t been revealed yet.

To get an indication, the closest comparable electric motorcycle on the market is probably the Zero SR. The SR offers a 120 mile (193 km) mixed city/highway range with a 14.4 kWh pack. Thus the low to mid-teens could be a possible kWh rating for the LiveWire considering it is likely a slightly heavier bike.

The LiveWire sports a 0-60 mph time of 3.5 seconds – a bit quicker than a Zero SR as well. The Zero SR features a 52 kW motor, so the LiveWire may be packing a little more power between your knees. And remember that this is a twist-and-go electric motorcycle without a clutch or gears. That torque is always there and instantly available whenever you open the throttle.
Another feature Harley-Davidson is keen to demonstrate is the highly connected nature of the bike. The company developed a suite of connected services enabled by an LTE-connected Telematics Control Unit hidden under the bike’s seat. The unit enables a rider’s smartphone to access everything from remote status checks, battery charging status and time to completion, trip planning, theft or vandalism notification, GPS tracking, service reminders, diagnostics and more.

According to the company:

Harley-Davidson is also in the process of preparing their dealerships for the new electric motorcycle. The company plans to have at least one dealership in all 50 states carrying the LiveWire, and more in large metropolitan areas. In order for dealers to carry the LiveWire, they must meet a list of requirements including most importantly installing DC fast charging on-site and maintaining a dedicated staff of LiveWire sales reps.

Harley-Davidson received such an enthusiastic response from dealers regarding the LiveWire that they are still in the process of narrowing down options and deciding which dealerships will get the new electric motorcycles.

If you had any doubt about Harley-Davidson’s commitment to bring an electric motorcycle to market, it should be pretty much crushed by now. The company said 2019 would be the year, and so far they have started off the year strong.

“We’re at a historic juncture of the evolution of transportation, and Harley-Davidson is at the forefront. Innovation that moves the body and soul has always been at the heart of our brand, and this next chapter in our history is about creating products and opportunities for existing and aspiring riders of all ages and walks of life.”

Harley-Davidson unveils two new electric motorbike prototypes
On any other day, the LiveWire’s new specs and beginning of pre-sales would be the biggest story here, but Harley-Davidson may have upstaged themselves with the unveiling of two new bikes.

These are just prototypes, mind you, so the specs are sparse and they don’t even have names yet. So far they appear to be referred to internally as the HD Electric Concept 1 (dirt bike) and HD Electric Concept 2 (scooter).
Just looking at the vehicles reveals a number of clues. The dirt bike is outfitted with large 3-4″ off-road tires, an inverted front suspension fork, rear hydraulic reservoir suspension, a low-slung motor case that appears to perform double duty as a structural frame member, belt drive and a seat that says to me “you’ll be standing on the pegs most of the time”.

The frame mounted battery sports a grab handle on top which seems to imply removability. That would allow for quick swaps at the track or in the field to increase riding time.

Large gauge battery wires could hint at some serious power levels, or could just be thick insulation. It’s too early to tell on that front.
The dirt bike could have the market nearly cornered in the US after the recent shuttering of Alta Motors, the only other US-based electric dirt bike manufacturer.

As exciting as the dirt bike is, the scooter is particularly interesting and further demonstrates Harley-Davidson’s intentions of entering the urban electric mobility market. With a mini-bike frame resembling other e-bikes and scooters such as those by Lithium Cycles and Juiced’s Scramblers, it appears to offer Vespa-scooter utility without the chic European styling of Vespa-esque scooters.

Again, no specs have been provided, but we can speculate from looking at the vehicles. On the scooter I see another inverted suspension fork, but no discernible rear suspension. A lack of rear suspension would make for a somewhat bumpier ride, though it would significantly reduce the price. And those giant street tires would absorb a large portion of road shock as well.

The motor isn’t visible but we can see a massive rear pulley and belt drive, indicating that the torque on this thing could be pretty impressive.
Lights include an impressive looking front LED halo headlight and a rear LED bar tail light. No turn signals are visible.

Oddly, only a front disc brake is visible, presumably leaving the rear with regenerative braking actuated by the same brake lever. That would rule out independent brake control – an interesting choice for a two-wheeled vehicle.

The battery also sports a handle, indicating a large and removable battery pack. That is becoming a standard feature on nearly all new electric scooters and mopeds. A removable battery allows those without a private garage or other charging facility at home to leave their bike outside and charge the battery indoors. It also allows owners to charge indoors during cold weather spells, which is better for battery life.

The running boards on Harley-Davidson’s scooter concept are perhaps the most striking, and appear to be just a skateboard deck cut in half and bolted to the side. They seem to betray the otherwise sleek design of the vehicle. But again, this is just a prototype.
Jennifer Hoyer from Harley-Davidson’s Media Relations described in an email to Electrek who these new electric prototypes are targeting:

“Both electric concepts provide enhanced attainability for customers around the world. These premium entry level concepts widen accessibility both for new audiences, and the traditional Harley-Davidson customer. Our goal for these concepts is to not require a motorcycle license to operate and feature clutch-free operation, lowering the learning curve and increasing access to attract new riders in the process. With an intended light weight target for each concept, agility and maneuverability are at the core of their riding experience and ease of use.”

That last clue regarding a lack of motorcycle license likely reveals a bit more about the vehicles. The dirt bike might not be street legal and the scooter could be limited to 30 mph which would make it a “moped class” vehicle not requiring a separate motorcycle license in many US states and countries.

All three vehicles are currently on display at the Consumer Electronics Show (CES) 2019 in Las Vegas. For the lucky few that get a chance to see them in the flesh, you surely won’t be disappointed.

Electrek’s Take
I’m really excited. Seeing the Harley-Davidson LiveWire begin sales and learning more electric specs is great, and the unveiling of two new prototypes is like a cherry on top of this exciting announcement.

I’m continuously impressed by the commitment Harley-Davidson is showing to incorporating electric vehicles into their lineup. The concepts are likely still at least a couple of years away from commercial availability, but they show that Harley-Davidson is intent on charging forward into the brave new world of EVs.

Let’s talk about the LiveWire first. A range of 110 miles means that while you can take it out for a pleasure cruise on winding back country roads, it’s going to more at home as an urban bike.

$30k is a lot for any vehicle, let alone a motorcycle. But remember that this is likely to be a lower volume production run, so there is some scarcity at play here. It’s also a premium motorcycle with premium components. Lastly, you’re of course paying for that bar and shield logo as well.

I just hope there are enough people willing to fork over the cash for this unique electric motorcycle. Without strong demand, it will be hard to convince Harley-Davidson’s execs to keep moving forward with the four other electric motorbikes in their portfolio.

But any way you slice it, this is a premium early adopter’s electric motorcycle. It’s meant for someone who would ride a Zero, but wants something a bit more special and can afford to pay for its unique-factor.

I asked Harley-Davidson’s VP of Product Portfolio Marc McAllister about who he sees as the intended market. While Harley-Davidson would love to see some of their existing base become interested in the LiveWire, and indeed some have, Marc sees the bike’s market largely as a new group of riders who never before considered buying a Harley.

I think that’s exactly who this bike is for – a new breed of Harley riders. And it’s that new market that could be what saves Harley-Davidson and helps it return to its once epic sales record.

The two new prototypes are perhaps even more intriguing for me because they are such a stark contrast to what Harley-Davidson does. With the death of Alta Motors, there’s a void in the market for electric dirt bikes. It’ll be great to see what Harley’s attempt brings and I’m on the edge of my seat awaiting tech specs.

And the scooter? Wow, talk about a new direction for Harley-Davidson. I can see why they didn’t start with this one, but if the LiveWire does well then I can see a market for it. There are other likely cheaper options for electric scooters in the US, but none will have Harley’s pedigree. I’ve long advocated for electric scooters and mopeds as perfect urban commuter vehicles, so seeing a new offering from Harley-Davidson is a very exciting prospect.

What do you think of all of these new announcements coming from Harley-Davidson? Let us know in the comments below. And check out the following video to see my own analysis of Harley-Davidson’s new EVs.
Back to news list