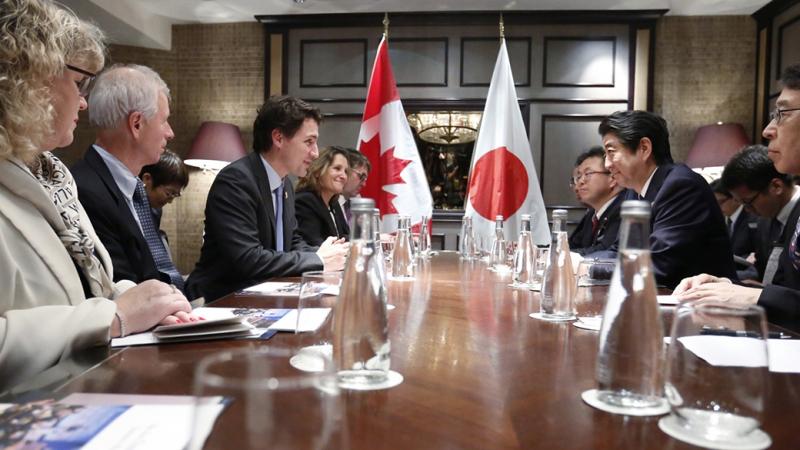 Canada and Japan have agreed to additional trade rules on motor vehicle safety and environmental standards, according to a side letter tabled in the House of Commons Tuesday.

The new measures take effect with the rest of the Comprehensive and Progressive Trans-Pacific Partnership (CPTPP) trade deal on Dec. 30.

North American auto manufacturers — Fiat Chrysler, Ford and General Motors — had expressed concerns about whether the CPTPP tilts the playing field in Japan's favour. Even after the text was signed, the Canadian government continued negotiating to try to address their concerns.

It's not clear that this side letter, dated Nov. 29, resolves their issues.

"We expect full and reciprocal market access," said Mark Nantais, president of the Canadian Vehicle Manufacturers Association (CVMA) representing these automakers. "Thus far, we haven't seen that."
When CPTPP takes effect, Canada will begin to eliminate its 6.1 per cent tariff on car imports from Japan and the other countries that have ratified the agreement. (Eleven countries signed the CPTPP, but only seven — including Canada and Japan — have ratified it so far and are now ready to start cutting tariffs.)

For Japanese vehicle brands not currently manufactured in Canada, the CVMA estimates that some $300-400 million in annual tariffs could be avoided once Canada's tariff is fully phased out over four years.

In theory, that could make cars like Mazdas or Subarus cheaper here — assuming the savings are passed on to consumers and not reinvested elsewhere by the companies.

About 25 per cent of the Japanese branded vehicles sold in Canada are imports. But according to the Japanese Automobile Manufacturers of Canada (JAMA), imports represent about half of the 100 models available, including the "next generation" hi-tech vehicles that may use greener power sources (electric, fuel cell or hybrid) or more artificial intelligence than Canadian-made vehicles.
While Nantais admits consumers could benefit from more choices down the road, he wonders whether that creates jobs in Canada.

Regulations discourage exports
North American carmakers interested in exporting to Japan don't currently face tariffs. But the Japanese have regulations in place that amount to non-tariff barriers for foreign brands, making it difficult to sell into that market.

"We should be negotiating agreements on the basis of what opportunities are provided," Nantais said. "If barriers are not resolved, it continues to limit market access."

The new Canada–Japan side letter includes language intended to discourage non-tariff barriers in the future.

Japan agrees not to discriminate between foreign and domestic brands with its vehicle standards, regulations or government incentives. It also agrees to streamline its testing process for noise and emission standards in imported vehicles — but not necessarily to eliminate the requirement for testing altogether.
The letter commits Japan to recognizing specified motor vehicle standards, but the standards laid out are the U.S. Federal Motor Vehicle Safety Standards (FMVSS), not their Canadian equivalents.

Because North American automotive manufacturing is so heavily integrated, the Canadian government tries to line up its rules with American standards. But should they diverge in big or small ways down the road — for example, if Canadian regulators want a higher standard than the one in place in the U.S. — it's unclear the Canadian standards would be recognized in Japan under this side letter. That could mean new red tape for exporters.

Nantais said he fears this could lead to subjective interpretations of the rules, leaving potential exporters entering the Japanese market without the certainty they may need to justify major investments.

Then there's the question of how enforceable the new measures really are.

"We don't believe side letters are the best instrument," Nantais said.

Japanese support their own brands
In an earlier draft of this side letter, Canada proposed a more demanding dispute settlement procedure than the CPTPP otherwise included.

The Japanese responded that this would never be acceptable to the legislators who needed to ratify the deal, so this final text refers only to resolving future arguments over automotive trade barriers using the dispute settlement mechanism laid out in chapter 28 of the main CPTPP agreement.

Separately, Canada and Japan already had agreed to accelerated timeframes for settling disputes between them.

David Worts, JAMA's executive director, said that while North American automakers have been vocal about the barriers they face in Japan, the real reason they aren't selling more cars there is that they aren't making the small, fuel-efficient cars the Japanese want and need.

About 80 per cent of U.S. sales to Japan are Jeeps, he added.
n the end, this letter is more about what Japan will agree to import than what it's already exporting to Canada.

The newly renegotiated North American free trade agreement is far more significant for Canada's auto industry than the CPTPP. The majority of the cars Canada makes are sold to Americans.

Concerns remain that the CPTPP and the new Canada–U.S.–Mexico Agreement don't match up — particularly when it comes to their rules of origin for determining which cars and parts avoid tariffs.

"If it doesn't sell one more car, don't expect me to congratulate you," he said.

"Japanese consumers tend to be very brand conscious and they're very loyal to their local brands," Worts said.
Back to news list