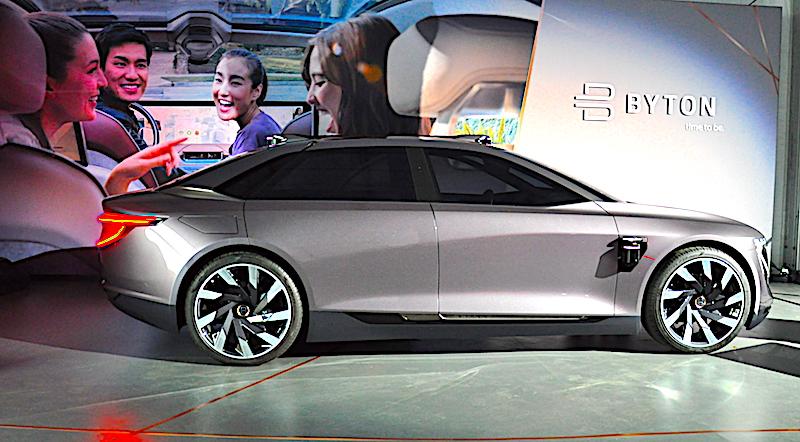 December 16th, 2018 by Nicolas Zart Cleantechnica
The 2018 Los Angeles Auto Show is over and leaves us with a few questions, observations, and trends to report back. In this first part, we take a look at startups and how they go head to head against more established carmakers, as well as the difference between the media days and public days. In part 2, we will look more closely at traditional carmakers
After an LA Automobility week where carmakers and a few startups show the media their best face, the public LA Auto Show sometimes shows very different displays and cars. This year it highlighted how many carmakers are still struggling with the electrification of their platforms and how the public views it. I was really left wondering why so many carmakers show the media one thing and the public another? Of course, that just goes for the major established automakers, not the startups highlighted above and below (Byton and Rivian)
By now, we could expect more electric vehicles, or at least a good mixture of electric vehicles and gasmobiles, at such a show.

It was intriguing to see that some traditional carmakers showed no plug-ins. Others seemed to hide plug-ins. Only a few seemed to find the fine line between combustion engines and electric alternatives on media and public days.

In the scratch-my-head department, I overheard traditional carmaker representatives either leading journalists in error as to the difference between a Tesla charging experience and the new CCS charging or simply not up to speed on EVs.

Overall, it was a mixture of great startup initiatives, some traditional carmakers showing signs of handling the EV change better than others, and some companies that just left me scratching my head.
In LA Auto Show Startup Offensive, Byton Takes Center Stage
Byton must be doing something right. It secured the front entrance tent where it gave rides of its M-Byte, while officially unveiling its sleek K-Byte. It was present during the media days, on various panels, and throughout the show. What I saw and heard made one thing clear. The startup put its ducks in a row and is now plowing through by finishing its 80% ready M-Byte for production by end of 2019 in China.

The few people coming out of the M-Byte riding experience I spoke with, including Scott Shaffer, exclaimed how big and comfortable it was, as well as how wild the digital experience was. Other cheers were around the interior, with its front swiveling seats and lack of a tunnel. The car feels big, yet it is only a crossover.

And this is where Byton is showing an advantage over not only traditional carmakers but other startups as well. It gathered car people, reputed security hackers, and a heck of a design team. Teenagers off the bat understood the big screen and the entertainment possibilities.
Could you have avoided seeing the gigantic Rivian EVs, the R1S and R1T, at the show? Absolutely and categorically not! Aside from the large presence, they also sport massive 180 kWh battery packs, which has excited people. I’m not sure where to start here, besides to say we’ll have much more to write about the startup soon, and check out Kyle’s deep dive linked above if you haven’t read it yet.

Rivian wasn’t dissing other carmakers, by the way, preferring to stay classy. It is concentrating on one thing and one thing only — making big efficient cars. But what struck me most was hearing what show-goers were saying: “Finally — an SUV and pickup truck alternative I can drive!” I can’t wait to talk to Rivian’s founders and see the manufacturing plant.
It’s great to see Tesla showing its Model S and Model 3 at the show again. It’s even greater to see show-goers stop, hangout, and ask plenty of questions. There is no denying Tesla is the current leader in the EV world.

Next, our friends at Urb-e showed their new e-scooters with a smaller battery and lower center of gravity. The mobility startup showed its light and sturdy folding cart, currently tested by UPS locally.

Genovation is a new company that takes a Chevrolet Corvette C7 and turns it into the GXE with a 61 kWh battery and a top speed over 220 mph.
ICONA, a design company, showed off a fascinating hydrogen fuel cell limousine with its future riding on Elaphe l1500 wheels. The concept is reminiscent of the 1960s TWA JFK Airport lounges, sleek and futuristic.

In the other department of fun, strange, and sometimes outright scratch your head, the Spaceship Will.I.Am Model S conversation certainly fit the bill.

City Hopper and I Meier showed two scooters, while Yamaha showed its PW-X e-bike.
You could say 12 plug-ins from startups and one hydrogen fuel cell concept are not bad, but we hope to see more next year.

In the next piece, we’ll look at which traditional carmakers showed what at the 2018 LA Auto Show
Back to news list