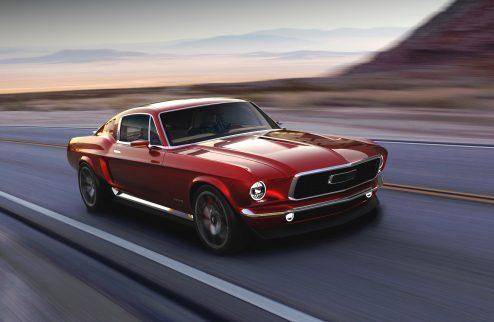 The retro craze is making it to the electric vehicle space and Russian EV startup Aviar Motors is jumping on board with an all-electric 1967 Mustang fastback with a Tesla-inspired interior.

It’s called the R67 and Aviar describes it as “the first electric muscle car with incredible acceleration dynamics and a high level of comfort.”

They claim that they managed to fit an impressive 100 kWh battery pack in a relatively small aluminum and carbon fiber chassis based on the 1967 Mustang fastback.

It enables some impressive performance, according to the company.

It is also equipped a sensor suite to enable “advanced driver assistance capabilities designed to ensure safety and comfort.”

This week, the company released new images of the Aviar R67:
The interior is heavily inspired by the Tesla Model S with a similar large vertical touchscreen in the center of the dashboard:

They are not the only ones looking to bring back old Mustang models as all-electric vehicles.

Here’s the spec sheet for the Aviar R67 all-electric muscle car:
Back to news list