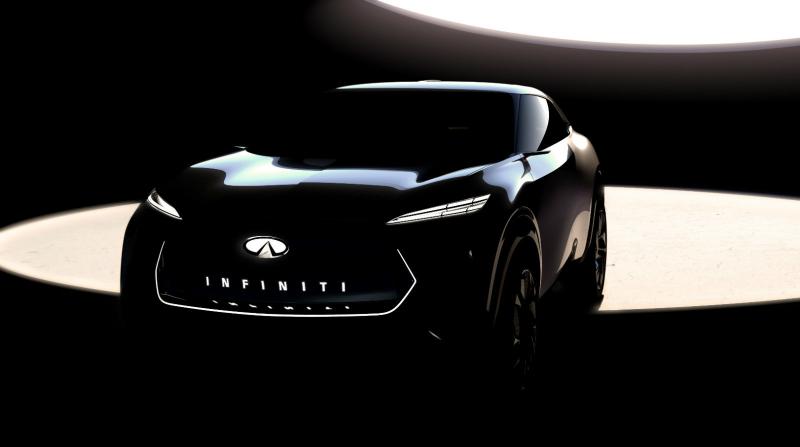 By: Ed Tahaney December 14, 2018
So it begins. Normally we can’t stand teaser images but this one from Infiniti actually provides a decent idea of what its new fully electric crossover concept will look like. So far, we dig it.

“The concept car we will show in Detroit is the beginning of a new era for Infiniti, and an illustration of where we want to go with the brand. Electrification and other new technologies have given us the opportunity to evolve our design philosophy,” said Karim Habib, Infiniti executive design director, in the release accompanying the image.

From the teaser image, the new EV concept will have a low and wide stance, thin slits for headlights, an LED-lit grille surround, and cameras instead of side mirrors. If you can’t tell the company responsible for the model, there’s a giant, illuminated clue emblazoned across the front end.

“Thirty years ago, as a 24-year-old designer in the audience, I saw the birth of Infiniti in person and am proud to be part of the journey of creating iconic luxury automobiles,” said Nissan global design chief Alfonso Albaisa. “Now, 30 years later, Q Inspiration shows how new proportions triggered by the new electrified power of Infiniti has inspired a new direction, a new visual language. Alongside our Prototype 10 Pebble Beach concept, both designs embody a deep simplicity inspired by the technology within and a new artistry inspired by our unique culture and of course our roots in Japan.”

The marque is preparing to celebrate its 30th anniversary and previewed this compact EV model in Hong Kong as part of the run-up to the occasion. The new EV platform on which it sits promises to provide designers with more interior space and the ability to create lounge-like cabins with plenty of new bells and whistles.
The industry is at a technological inflection point,” said Infiniti chief Roland Krueger. “As such, Infiniti has a compelling vision as a luxury challenger brand to bring a full portfolio of beautifully-designed electric vehicles to customers around the world. We will focus on developing the full portfolio of e-power and EVs.”

The brand plans to electrify its entire portfolio with hybrids or pure EV powertrains by 2021.
Back to news list