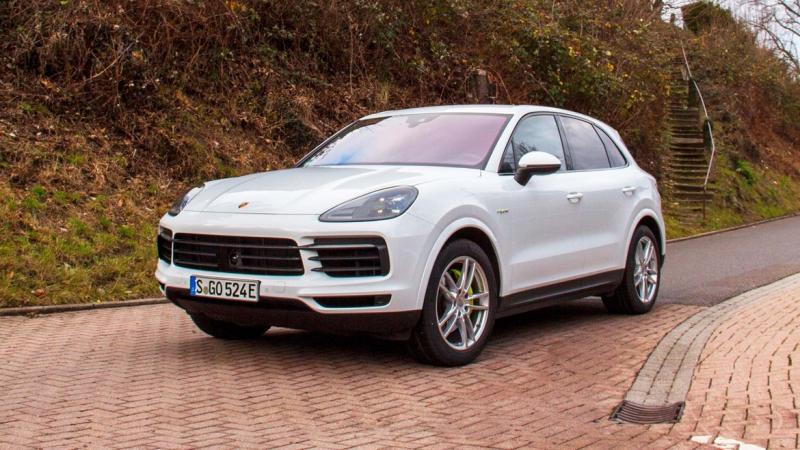 STUTTGART – It’s easy to imagine what these legendary woods looked like before the 19th century, when the area was almost completely deforested and replanted with spruce. Then a mixture of deciduous, and enormous pine and fir trees, it was dubbed “silva negra” by the Romans of the Middle Ages for its dark and foreboding impenetrability. Today, the Black Forest is just over 6,000 square kilometres of towering spruce that, in this fading light, form a dark canopy over the silvery strip of pavement ahead of us.

"While the Cayenne Turbo is still top dog (for now), the E-Hybrid out-pulls and out-sprints both the Cayenne and Cayenne S."

If it seems hypocritical to speak wistfully of the forest’s magnificence prior to the arrival of civilization and destruction – all while blasting full tilt through it in a Porsche, well, the consolation is that it’s at least a hybrid.

The realities of climate change are undeniably upon us, and the push to develop alternative energy sources is gathering momentum – and nowhere is it felt more strongly than in the automotive industry. Nearly every manufacturer features at least one electrified vehicle, many have an EV version of every car in their lineup, and a few have pledged to abandon the combustion engine altogether. China – the world’s largest market – along with Britain, France, India, and Norway, are working out how to ban the production and sale of cars powered solely by fossil fuels.


In its infancy, the EV segment consisted mainly of frumpy cars with a certain cachet; they bestowed a sense of virtue upon the early adopters at the forefront of the green movement. Now, of course, they’re commonplace and quickly becoming a necessity, with customers clamouring for affordable EVs that don’t sacrifice range nor comfort – and the infrastructure necessary to support them. And they’re no longer frumpy; cars like the all-electric Tesla Model S and BMW i8, Acura’s hybrid NSX, and of course, Porsche’s 918 Spyder prove that EVs can offer performance and handling in compelling design packages.

Porsche announced its plan earlier this year to invest six billion euros in their EV strategy, with 500 million euros earmarked for the fully electric Taycan alone, and another billion estimated to be spent on electrifying their current model lineup. By 2025, they claim one out of every two Porsches sold will be electrified.

The latest addition to the recently redesigned Cayenne SUV lineup, the E-Hybrid adopts the same design elements that tie it closer to the rest of the Porsche family, while introducing some new features soon to be available across the Cayenne model range.

You have to really look to distinguish the E-Hybrid from the other variants. The most telling feature is the acid-green brake calipers. The badging is outlined in the same acid green, and there’s a charge plug flap on its left rear haunch. Otherwise, it receives the same changes for 2019 as the regular variants. Up front, the side air inlets are now integrated with the grille, like the upcoming 992 generation of the 911. The lower fascia has been streamlined for a cleaner, more finished look. LEDs are now standard on the reworked headlights, with the Porsche Dynamic Light System or LED Matrix beams available as options. Sharp character lines accentuate the surface of the hood making it appear sleeker and more aggressive.

The rear end also receives a nip and tuck, with a new full-width rear lighting element replacing the single taillamps, similar to the Panamera and 911. The lower fascia receives diffuser-style strakes.

The cabin underwent the same style makeover as the Panamera, with similar dash, vents and centre console styling. A new 12.3-inch colour display is now the focus of the revised centre stack, and the busy rows of buttons are gone; replaced by a slick black panel with illuminated controls. You’d need to keep a lens cloth handy to keep it shiny – it’s a veritable magnet for fingerprints. Like the regular variants, the gauges consist of a large analogue tachometer flanked by 7-inch virtual screen gauges. But the tach and Sport Chrono dial feature hybrid-only acid-green needles, and the gauges and infotainment display both have additional screens relaying hybrid function and charging information. Charging functions can be monitored with a “Porsche Connect” smartphone app.

The Sport Chrono Package is standard, and includes the steering-wheel-integrated mode button found in Porsche’s other vehicles. In addition to the familiar “Sport” and “Sport Plus” mode, the E-Hybrid also adds four hybrid-only drive modes: “E-Power” for up to 44 km of pure electric driving; “Hybrid Auto” which automatically switches between, or combines the power sources for optimum efficiency; “E-Hold” conserves the battery’s charge for later use; and “E-Charge” which channels excess energy from the combustion engine into the battery storage. It takes 7.8 hours to recharge the E-Hybrid using a regular household outlet, four hours with Porsche’s 230 volt 10 amp home charger – and only two hours with the optional onboard charger.

It’s not often that jumping into a hybrid after the regular variant feels like an upgrade. When the Panamera Turismo debuted last year, the Turbo E-Hybrid model was the range-topping, most powerful model. While the Cayenne Turbo is still top dog (for now) with 550 hp and 770 nm of torque, the E-Hybrid out-pulls and out-sprints both the Cayenne and Cayenne S. It uses the same turbocharged 3.0L V6 as the Cayenne, with 335 hp and 332 lb-ft, but on top of that, adds the 134 hp and 295 lb-ft electric motor between the engine and eight-speed ZF transmission. The combined output is 455 hp and 516 lb-ft from 1,000 to 3,750 rpm – which enables the E-Hybrid to sprint from 0–100 km in 4.7 seconds.


It certainly feels no slouch on the road, easily keeping up with the Cayenne Turbo, and handling the twisty narrow roads with balanced aplomb aided by Porsche Active Suspension Management (PASM) and Porsche Dynamic Chassis Control (PDCC). The optional rear-axle steering helps the E-Hybrid handle corners with laser accuracy – turning front and rear wheels at slightly opposite directions for better turn-in; and all four wheels in the same direction at high speeds for better stability.

It’s not only quicker and more powerful than the outgoing Cayenne Hybrid, thanks to a larger 14.1 kWh battery; it now has a range of 44 km at up to 135 km/h on electric power alone. In most situations, the E-Hybrid is instantly responsive, although much more sluggish during pure EV driving.

We observed 8.5L/100 km on the fuel consumption gauge after a couple of hours of stop-and-go rush hour traffic, highway, and “vigorous” forest road driving.

It’s easy to forget you’re in a hybrid in this Cayenne. There are a few niggling reminders; while the brakes are far superior to the outgoing model’s and haul the E-Hybrid down admirably from speed (despite it having 600 pounds over the regular variant) but they’re grabby at low speeds and howl mournfully at low speeds. Cargo space, one of the most important features in the SUV category, drops from 745 to 645 litres due to the battery’s placement under the trunk floor. The shifter isn’t very intuitive, which can be dangerous when you don’t hear the EV running and you’re not sure what gear you’re in. While it starts at $91,700, the E-Hybrid can very quickly climb up to $150,000 if you start ticking all the option boxes.

But despite that, the E-Hybrid is still the driver’s choice in the electrified SUV segment. It has a sharp responsiveness and handling excellence that the others – focussed mainly on efficiency – simply don’t have. It also sprints 0–100 km/hr in under 5 seconds, while consuming less fuel than much smaller cars.

The 2019 Porsche E-Hybrid is scheduled to arrive in Canada sometime after the regular Cayenne’s spring arrival.