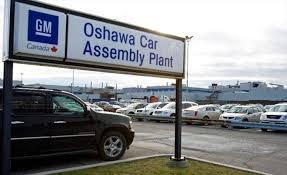 Could Tesla take over the Oshawa GM plant?

BY JAIME PULFER AND NEWS STAFF POSTED DEC 10, 2018
Could they soon be making Teslas in Oshawa?

In an interview on 60 Minutes, the electric car company’s CEO said he’s not ruling it out.

“It’s possible that we would be interested,” Elon Musk said.

“If they were going to sell a plant or not use it that we would take it over.”

The plan would be to start assembling Tesla vehicles at these facilities.

General Motors announced last month that it would be closing the Oshawa assembly plant, along with four other facilities in the United States, as part of a global restructuring plan.

Musk said the whole point of his company is to accelerate the advent of electric cars, while trying to help the environment — something he thinks is the most serious problem humanity faces.

Tesla has ran into some production issues this year with the company unable to make cars fast enough to meet demands. Currently Tesla only has one production plant that is based in California.

Shares of Tesla rallied two per cent on the market after Musk’s interview.

Tesla has had a fluctuating relationship with Ontario since the Ford government came to power.

In August, an Ontario court ruled in favour of the Canadian arm of Tesla Inc. in its petition that it had been treated unfairly in the provincial government’s cancellation of an electric vehicle rebate program.

Ontario Superior Court judge Frederick L. Myers said the decision to exclude Tesla from a grace period for the program’s wind-down was arbitrary and had singled out Tesla for harm.

Tesla launched the legal petition after Ontario’s Progressive Conservative government ended the rebate program on July 11, but said it would extend the rebates to vehicles already sold through dealerships if they were delivered and registered within 60 days.

The provincial government later clarified that the extension only applied to vehicles sold through franchised dealerships, which excluded Tesla’s Ontario dealerships.

Tesla said it had 600 active customer orders when the government ended the program in July and that 175 customers had since cancelled their orders.
Back to news list