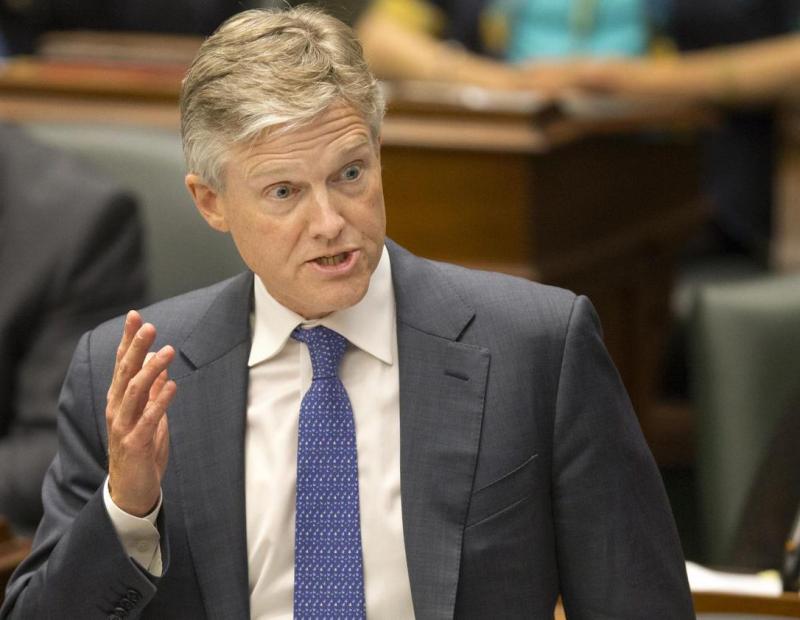 Mike Crawley · CBC News · Posted: Nov 29, 2018
The Ontario government unveiled its plan to combat climate change Thursday, including a fund to pay big polluters to reduce emissions.
The regime, called the Preserving and Protecting our Environment for Future Generations: A Made-In-Ontario Environment Plan, aims to keep the province working toward meeting the emissions-reduction targets agreed to in the Paris Accord. That international agreement, which Canada has signed, calls for the reduction of emissions by 30 per cent of 2005 levels by 2030.
Ontario has reduced emissions by 22 per cent, Environment Minister Rod Phillips told a news conference Thursday afternoon at a conservation area in Nobleton, Ont., just north of Toronto.
A major plank of the new plan is the Ontario Carbon Trust, to which the Ontario government will commit some $400 million over four years, to work with the private sector on developing clean technologies.
Other features of the plan include measures to monitor sewage and pollution in provincial waterways, conserving land and green space and reducing litter in the province's communities.
"It's a plan that represents a clean break from the status quo, and it's a plan that balances a healthy environment and a healthy economy," Phillips said.
Before unveiling the new plan, Phillips said Ontario must address climate change, but not through a carbon tax. Asked how the province can reduce greenhouse gas emissions without putting a price on carbon, Phillips responded with questions of his own.
"I put the question back to all the proponents of carbon taxation: How can they be so focused on just one solution when we're dealing with something this complicated?" he said Wednesday. "Are they dedicated to a carbon tax or are they dedicated to real action on climate change and reducing GHGs?"
The Ford government brings in its climate change strategy against the backdrop of its bitter fight with the Trudeau government over carbon pricing. Ford fired the latest shot Wednesday, blaming the planned federal carbon tax for General Motors' plan to close its assembly plant in Oshawa, even though GM announced at the same time it intends to close four U.S. plants too.
Ontario is currently joining Saskatchewan in a court battle against the move to impose a federal carbon pricing scheme on provinces that don't have one of their own. Ottawa has shot back by bypassing the Ford government and sending $420 million from its Low Carbon Economy Fund directly to cities, hospitals, universities, schools and businesses to help with efficiency programs and other emission-reduction efforts.
One of Ford's first moves as premier was scrapping the previous Liberal government's climate change plan, which was built on a cap-and-trade program, forcing companies to pay for permits to emit GHGs. Ford campaigned vigorously against cap-and-trade, characterizing it as a carbon tax and calling it the "worst tax ever."
The PCs promised during the election campaign to create an emissions-reduction fund, offering public money to companies that come up with innovative ways to reduce their greenhouse gas output. That's a signal the plan may borrow from the model currently used by Australia's conservative government — a plan that has been criticized for failing to reduce the country's emissions
Philips has said Wednesday he was looking to jurisdictions around the world, including Australia, in developing the plan
"The situation in Ontario is very different from the situation in Alberta or the situation in New Brunswick because our electricity sector and our grid is almost 100 per cent green," Phillips said. "This is why a made-in-Ontario solution makes sense."
Ontario has already brought down its greenhouse gas emissions by 22 per cent from 2005 levels, in large part due to decommissioning all coal-fired power generation, but also because of the drop in the province's manufacturing output since that date.
A report issued Tuesday by the United Nations environment office said worldwide greenhouse gas emissions continue to rise, and that emissions must drop 55 per cent from 2017 levels by 2030 to prevent the global average temperature from rising more than 1.5 degrees.
Back to news list