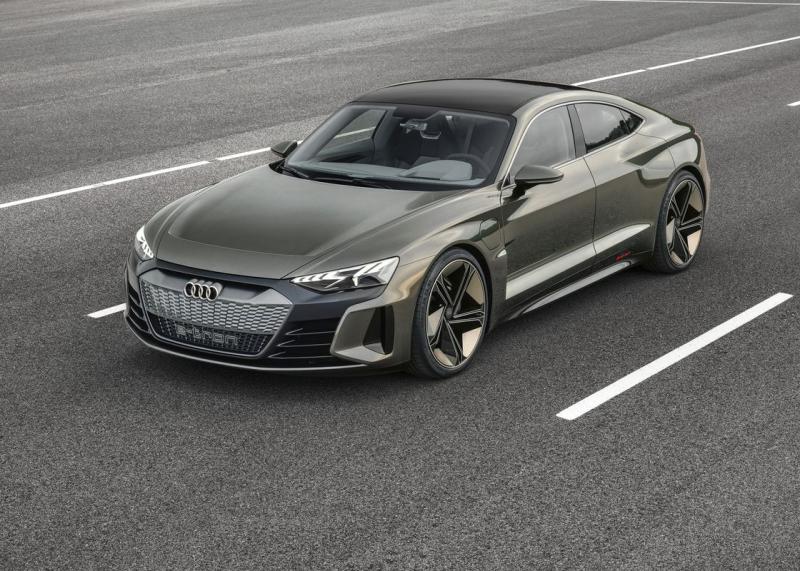 By Sean O'Kane@sokane1 Nov 28, 2018 theverge.com
Just two months after the debut of its first electric car, the E-Tron SUV, Audi has announced a new EV called the E-Tron GT Concept. It’s a sleek sedan that gets its electric power from the same drivetrain and battery platform that will be in Porsche’s first EV, the Taycan.
The concept was unveiled at this week’s LA Auto Show, and will go on sale in just two years, with deliveries starting in early 2021, according to Audi. No pricing has been set.
Sitting on 22-inch wheels, the E-Tron GT takes power from a 90kWh battery pack and puts it into two electric motors (one on each axle). In total, that drivetrain creates 434 kilowatts of power, or 590 horsepower. That’s good enough to go from 0 to 60 mph in about 3.4 seconds, according to Audi.
Audi is estimating a range of about 248 miles for the E-Tron GT, according to Europe’s new Worldwide Harmonised Light Vehicle Test Procedure (WLTP) standards. While WLTP is more stringent than the previous standards that automakers used to predict range, its estimates are still a bit rosier than what the EPA generates, meaning real-world range performance could wind up a bit short of that mark.
Since it shares Porsche’s Taycan tech, the E-Tron GT will also feature very fast charging. The 800-volt battery system is able to go from nearly dead to 80 percent charged in 20 minutes, faster than basically anything else currently on the market — including Tesla’s Superchargers.
While it’s beyond passé at this point to call a car a “Tesla Killer,” announcements like the E-Tron GT concept serve as stark reminders that traditional automakers have a wave of EVs on the horizon. By the time the GT concept becomes reality, Audi will have the E-Tron crossover as well as a sportback version on the road, and the German automaker’s first efforts in this field will be joined by similar products from Mercedes-Benz, Volkswagen, and many more
Back to news list