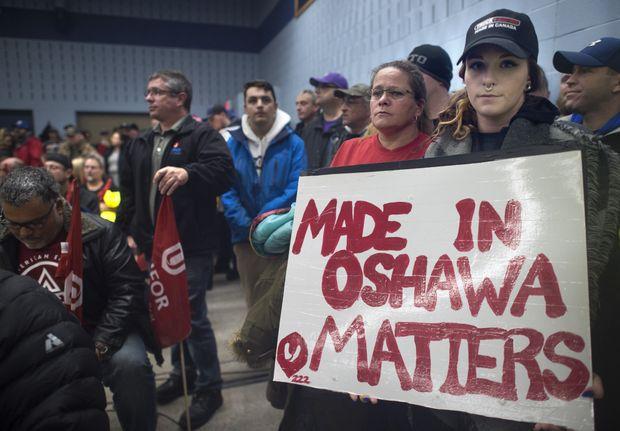 The end of GM’s Oshawa plant: What we know so far

Globe and Mail 26.11.2018
Workers at the General Motors plant in Oshawa, Ont., are expected to be back at work on Tuesday after news of the facility’s closing prompted walkouts the day before. Their union, Unifor, has denounced the plant’s demise and called on GM to stand by a 2016 bargaining agreement to keep jobs there.
The Oshawa will be one of five North American facilities scuttled in 2019, the U.S. auto giant confirmed Monday. The closings, will put more than 2,500 in Oshawa out of work and eliminate up to 14,700 jobs over all across the continent, saving the company about US$6-billion worldwide.
GM’s changes are part of a worldwide shift to electric and self-driving cars, and an acknowledgement that U.S. consumers are buying fewer cars than they used to. Here’s a primer from The Globe and Mail’s Ian McGugan on the economic challenges GM and the auto industry face.
The Prime Minister and Ontario Premier pledged to work together on measures to help laid-off workers, while conceding the futility of trying to persuade GM to keep the plant running beyond 2019. U.S. President Donald Trump told the Wall Street Journal on Monday that GM should stop making cars in Canada and make them in the U.S. instead.
Open this photo in gallery


What GM is doing and why
When the Oshawa plant is closing: GM’s Monday statement didn’t use the word “close,” instead saying that, as of 2019, the Oshawa plant and several others would be “unallocated,” meaning no products are assigned to be made there. Sources have confirmed to The Globe that the Oshawa plant will indeed be shut down.
What U.S. plants are closing: In addition to the Oshawa closing, GM says it has no plans to make automobiles at two other factories – one in Warren, Ohio, and the Detroit-Hamtramck plant in Michigan – as well as parts plants in White Marsh, Md., and Warren, Mich. Two unnamed plants outside North America would also be affected, as well as previously planned cuts in South Korea, the company said.
How many jobs are affected: GM’s layoffs and buyouts could endanger up to 14,700 factory and white-collar workers' jobs in North America. The GM plant in Oshawa employs 2,522 unionized workers and is also GM’s Canadian headquarters.
What models are being phased out: Several vehicle models that were made at the scuttled plants will be discontinued, including the Chevrolet Cruze, Cadillac CT6 and Buick LaCrosse.
Why this is happening: The changes are part of a shift in the company’s global production toward autonomous and zero-emission vehicles, Mary Barra, GM’s chief executive officer, said at a Monday news conference. "The actions we are taking today continue our transformation to be highly agile, resilient and profitable, while giving us the flexibility to invest in the future,” she said. The company expects to save US$6-billion from the cutbacks.
Back to news list