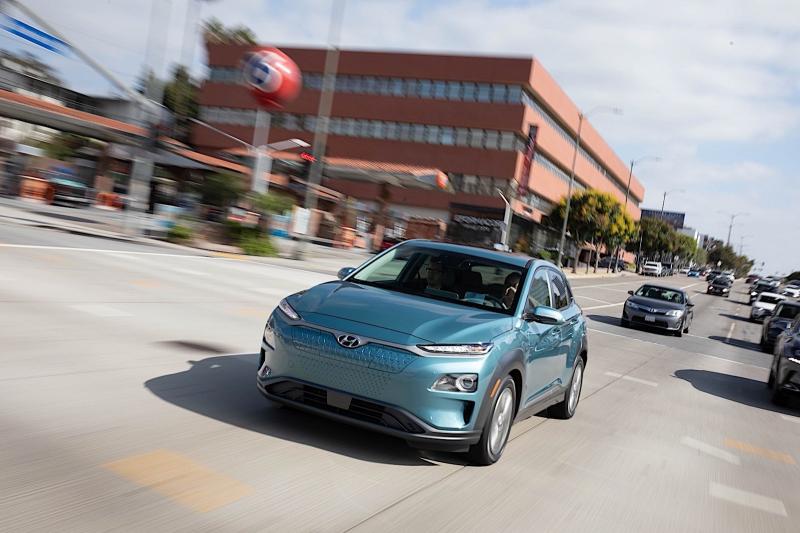 Hyundai's Kona Electric is ready to hit the road

Hyundai likely isn't the first automaker that springs to mind when talking about electric vehicles, but maybe it should be. While industry stalwarts like Ford and startups like Tesla dominate the conversation around the future of the EV market, Hyundai is out here quietly developing a a crossover SUV that can travel farther on a single charge -- 258 miles, to be precise -- than any other electric vehicle on the market (that isn't presently built by Elon Musk).

The Kona Electric (or Kona EV, in Hyundai's marketing shorthand) is, unsurprisingly, based on the existing Hyundai Kona gas-powered platform, which we were also very impressed with. The exterior stylings are virtually identical, with the EV just 0.6-inches longer and 0.2 inches taller. The two models also share the same trio of trim packages. You've got the base SEL, then Limited and Ultimate. The Kona EV will be available in six colors, two of which are exclusive to the electric model. The vehicle was designed, as Chris Chapman, Senior Chief Designer at the Hyundai Design Center explained, with the motifs of circuitry and flow in mind.


The trim package you select will have a bigger impact on the interior of the vehicle. They all share the same basic layout with plenty of leg and head room. The Kona EVs also offer 19.2 cubic feet of trunk storage, second in the market only to the Nissan Leaf, which is more than a foot longer overall. The SEL package nets you a 7-inch touchscreen infotainment display with Apple CarPlay and Android Auto compatibility as well as Sirius XM radio and BlueLink connectivity (which enables you to control various cabin, battery charging and conditioning features through your smartphone). You'll also get some helpful driver assist features at the SEL level including forward collision-avoidance assist, blind-spot collision warning, lane keeping assist, and driver attention warnings.

The Limited package includes everything from the SEL and tosses in LED head and tail lights, a sunroof, high beam driver assist, Qi-compatible wireless device charging and Homelink connectivity.

Springing for the top-of-the-line Ultimate trim package gets you the whole high-tech shebang: everything from Limited plus an 8-inch LCD touchscreen navigation system, forward collision-avoidance assist (with pedestrian detection this time), an Infinity audio system by Harman, rain-sensing wipers; heated, ventilated and powered front seats; a heated steering wheel for some reason and, most importantly, adaptive cruise control that actively follows the car in front of you.

Adaptive cruise control availability generally isn't the best automotive hill to die on, but this is a feature that was obviously and sorely lacking in the Kona gas model. Unfortunately, its inclusion with the EV model leaves car buyers with a Sophie's Choice situation. Do you go with the gas version that has 4WD but no smart cruise control or do you get the electric with adaptive cruise but has only front wheel drive?

It depends on where you live, a Hyundai rep explained to me during our demo drive through the Topanga State Park, just outside of Santa Monica California. For folks that live and commute through urban Los Angeles or San Francisco the cruise control will likely be more intriguing, while folks living in, say, more sparsely populated Calaveras County (where it often snows during winter months) will be more apt to spring for the AWD. So make like Indiana Jones and choose wisely.

The Ultimate trim package also includes, in my opinion, the single coolest, hardest squee-inducing feature I've seen in a car since the inclusion of USB ports: a pop-up, heads up display. No, seriously, this thing is great. You turn on the car and this little 6-inch square of acrylic extends out from the top of the instrument cluster. It displays a ton of useful information including your speed versus the posted speed limit, as well as lane departure, blind spot, and front collision warnings. It's basically a stripped-down version of the instrument cluster itself but positioned just below your natural line of sight when driving. This may sound like a minor thing, "just look down a little further, you lazy SOB" you might be thinking to yourself, but omg this thing is useful.

When the Kona EV isn't impressing with its cabin loadout, the crossover is eating up miles. Its 64 kWh battery can output at 170 kW, propelling the vehicle up to a class-leading 258 miles on a single charge or top it out at (an artificially-limited) 104 mph. The vehicle's lowish center of gravity (thanks, floor-mounted battery packs) also translates into a sportier and more responsive ride. Granted, you're obviously not going to be taking corners like you would in an NSX, but neither will you spend the duration of every curve death-gripping your door handle like you would in a Wrangler.
Click for Link
Back to news list