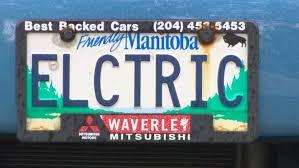 Electric vehicle owners in Manitoba say more needs to be done to encourage drivers to hang up the gas pump and switch to zero-emission automobiles in this province.

The Manitoba Electric Vehicle Association (MEVA) held its annual MEVAfest Saturday, an event that brings electric vehicle (EV) owners out to meet and answer questions from drivers interested in making the switch.

That's because Manitoba simply doesn't have the fuelling infrastructure yet, he says.

"Most of them would love to be driving pure electric, but we can't because there aren't enough electric vehicle fast charge stations in Manitoba," he told CBC News.

Manitoba Electric Vehicle Association president Robert Elms says are currently more than 6,000 EVs on Manitoba roads, but the majority are hybrids. (Walther Bernal/CBC)
Elms says Manitoba would need a network of between 25 to 30 fast charge stations in order for drivers to get around the province using electric vehicles.

Right now Elms says there's just one station in Winnipeg that's open 24/7 and a handful of dealerships that offer the service intermittently.

"But really, it's not enough," he said, adding other provinces have seen a spike in EV sales after building a network of charging stations and offering incentives to buy the vehicles.

"Ontario just put in over 100 just last year and Ontario's sales of electric vehicles last year soared up by 145 per cent in one year. New Brunswick is installing 12, Nova Scotia is installing 15, Quebec has got well over 100 across the province and B.C. is going to have over 63 charging stations."