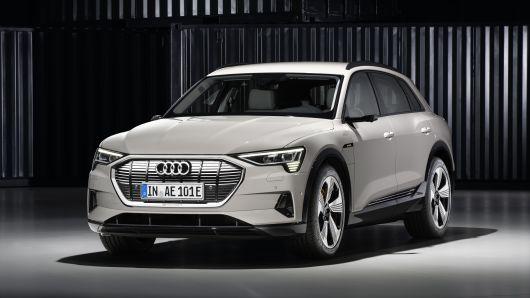 In a city where Teslas are a common sight — and just a short drive from the Fremont factory where Elon Musk's company is cranking out a record number of electric vehicles — Audi rolled out an all-electric SUV it hopes will cut into Tesla's dominance of the luxury EV market.

Audi's new e-tron, which hits the market next spring, has been heralded as a game changer by leaders of the German automaker. The carmaker chose to unveil it in Richmond, California, at the site of an old Ford plant, that is across the bay from San Francisco.

Audi is not disclosing the e-tron's range, since it has not been certified by the Environmental Protection Agency, but it's expected to be competitive with Tesla's vehicles, which all get more than 295 miles when fully charged. Add in styling that has helped Audi attract a growing percentage of upscale buyers in the U.S., and it's clear the e-tron is taking full aim at Tesla.

While the vehicle's range is expected to be a bit less than that of the Tesla Model X, which is a comparably priced electric SUV, Audi of America President Scott Keogh said the difference won't matter to most customers.
Click Here For Link
Back to news list